Forward head posture–intuitively we know it’s a bad sign. And medical research tell us that the consequences of forward head posture reach much farther than the obvious symptoms of neck and shoulder pain. So why ignore this easy to identify disorder? And why do many doctors seem to disregard its impact on your health?

Basically, if you view yourself from the side, there is an ideal position for your head above your shoulders. In fact, you can go from head to toe, connecting several body landmarks to get a pretty good idea of whether or not the postural arrangement of your body is going to lend itself toward health or dysfunction. For example, a line dropped vertically through the side of your body would ideally pass through:

The arrangement of the head and neck are particularly important because they tend to be more prone to postural dysfunction.

The reason for this is probably due to the fact that the neck lacks the structural support of the ribs and other larger muscles that the rest of the spine has supporting it. Also, the weight of the head over the neck and the significant range of motion we have in moving the head and neck, lends to the propensity for abnormal stress and acquired accidents and injuries to impact the structural alignment in this area. Not to mention the fact that modern lifestyles tend to force us into positions that encourage this abnormal posture (extended time sitting at computers, staring down at books & cell phones, etc.).

Most of us can appreciate the obvious effect forward head posture can have on the muscles and joints of the neck and upper back.

And if you’ve watched the video posted at the beginning of this article, you can understand how just a few inches of forward head posture can double, triple or even quadruple the amount of force absorbed by your joints and effort required by your neck and back muscles.

But what you might not realize is that forward head posture can have an even darker side when it comes to its impact on both your day to day quality of life and your long term health and vitality.

Instead of delving into a lengthy list of conditions that can result from long-term forward head posture, I’ll mention three of the most common conditions I see clinically that often result from this postural distortion of the head and neck.

Clicking, locking, and other forms of TMJ disorders are notoriously difficult to overcome. One of the reasons for this difficulty lies in the intimate, but often overlooked relationship between the mechanics of jaw movement and the alignment of the head and neck. 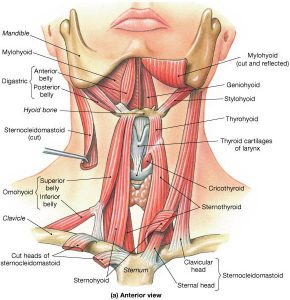 The neck & jaw are closely connected by many muscles.

Too often jaw problems are addressed by looking only at the alignment and status of the tempero-mandibular joint (TMJ), when, in fact, the source of the jaw problems encompasses a much more complex mechanical dysfunction that includes the entire head and neck alignment.

If you could look through the tissue covering the muscles, tendons, joints and ligaments that are involved in normal movement of the jaw, you would see a complicated system of attachments between the jaw, head, neck and hyoid bone (the “floating” bone that produces the “Adam’s apple” seen in some people).

When the position of the head and neck becomes abnormal, this change in alignment places stress upon the connective tissues that attach to the jaw. Many of the muscles making these connections serve to not only provide movement, but also act as sensors sending information about the position of the head, neck and jaw, so that other muscles can respond appropriately to provide normal movement.

This is why patients who have dealt with long-term TMJ problems routinely find that their jaw no longer troubles them once the alignment of their head and neck has been corrected.

One of the most frequent scenarios I encounter is the individual who has never had a headache or migraine in their life until they became involved in a car accident. Sometime after they find themselves popping pain-killers on a daily basis just so they can get through their workday.

Whether it’s a car accident or some other type of trauma, whiplash injuries commonly damage the connective tissues that normally maintain the proper alignment of the head and neck. 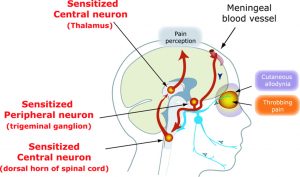 When the muscles, tendons and ligaments suffer this type of trauma, abnormal stresses are transferred to the joints between the head and the individual vertebrae of the neck. As a result, pain receptors in these joints are activated and begin to send signals to the central nervous system alerting you that there is a problem.

If the alignment of these joints isn’t corrected, these signals can continue to barrage the central nervous system even in the absence of perceived pain.

Headaches are often the result of these signals inappropriately “spilling over” into nearby nerve channels and causing pain in areas other than the neck. Sometimes the situation can even result in sharp, searing pain in the face and jaw.

Correcting the alignment of the joints in the neck that are producing this barrage of sensory information being sent to the brain is necessary in order to stop the flood of inappropriate pain signals that result in headaches and other types of facial pain.

One of the more devastating effects of forward head posture and other forms of head/neck misalignment is the change that can occur in circulation of two critically important fluids your brain relies on for normal function:

Studies using an imaging technique that is able to measure the volume of blood exiting the skull have shown us that when the head and neck are misaligned, blood flow is slowed down. What this means is that if the alignment of your head and neck is abnormal, you’re brain may not be getting the amount of oxygen and energy that it requires.

Similarly, the same imaging technique has shown that following a specific correction to the top-most bone in the neck, the circulation is able to normalize, thus restoring the flow of blood through the skull and to the brain.

Cerebrospinal fluid (CSF) is the fluid that bathes the brain and spinal cord, providing nourishment, protection, and immunological defenses. This fluid is produced by 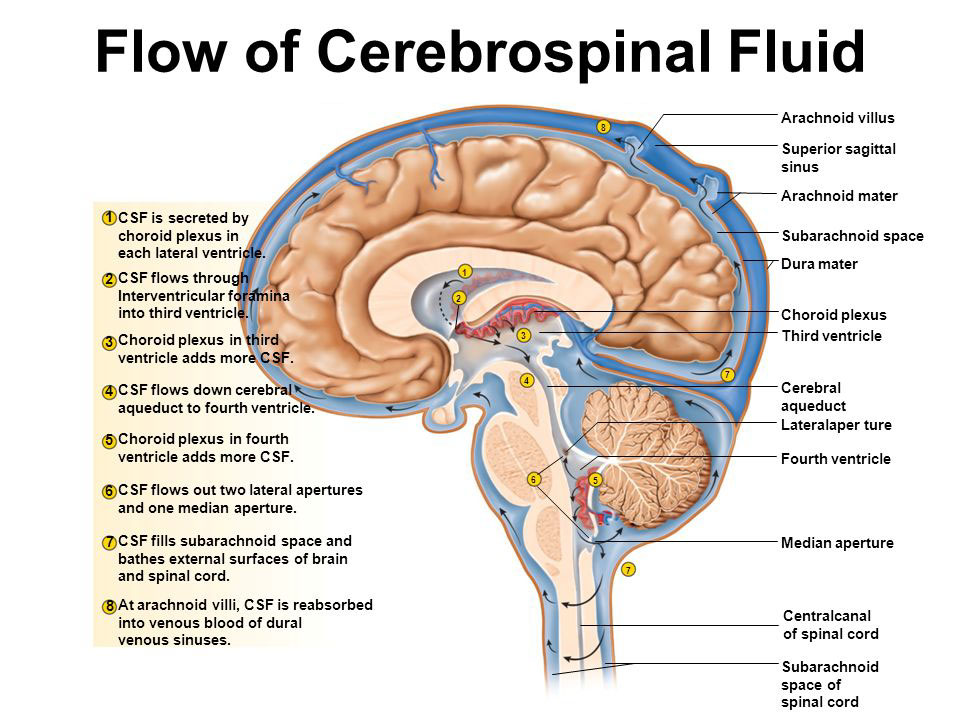 specialized cells located in small pockets in the brain. Like blood-flow, CSF circulation is impaired when head/neck misalignment occurs.

The serious nature of this abnormal circulation is just beginning to be understood in light of current research. Many studies point to the connection between neurodegenerative diseases like multiple sclerosis and this abnormal CSF circulation.

It appears that inadequate circulation of CSF results in an increase of pressure building up inside the skull. This can result in the collapse of blood vessels, further interfering with circulation of blood to the brain.

It can also be implicated in the production of migraine headaches and a number of other disorders. For example, Meniere’s disease is a condition in which individuals experience dizziness, ringing in the ears, fullness in the ears and often permanent hearing loss. It’s long been thought that a buildup of fluid in the inner ear is responsible for this condition, but no treatment has been able to effectively address this problem

What’s been overlooked however, is that there exists a small opening between the space in the head that contains CSF and the space in the inner ear that is thought to have too much fluid inside. When CSF pressure increases in the skull, this pressure gradient can be transferred to the inner ear, producing the symptoms found in Meniere’s disease.

Many individuals suffering from Meniere’s disease have found long-term relief through upper cervical care because it addresses the critical alignment of the head and neck.

Medical science is just beginning to understand the complex interactions between the alignment of the joints between the head and neck and our overall neurological and circulatory health. The little that we do understand seems to clearly indicate that this alignment is critical for the long term cognitive and physical health of individuals, particularly as it pertains to maintaining your health and mental acuity into old age.

So why, in light of all we know about the importance of the postural alignment of the head & neck, do many health care practitioners ignore this critical component to your health?

Much of the problem lies in the fact that modern health care has come to rely almost exclusively on the use of pharmaceuticals for the treatment of pain and disease.

Medicine didn’t always operate this way, and there are many medical textbooks from past decades that outline the importance of postural alignment as it relates to overall physical and mental health and well-being. But as it currently stands, medical practitioners simply aren’t trained to look at the relationship between body structure as it relates to normal function. So many simply don’t realize the importance postural dysfunction.

Secondly, many health care practitioners don’t have the training or tools to correct complex postural dysfunction, and so they tend to disregard it in favor of the other interventions that they are more familiar with.

The good news is that postural dysfunction is relatively easy to recognize on your own. And if it seems likely that postural alignment may be connected to your health problems, an upper cervical practitioner will be able to determine whether postural dysfunction is the result of neurological abnormality in the area surrounding the brain stem where the head and neck come together. The National Upper Cervical Chiropractic Association (NUCCA) maintains an active list of upper cervical practitioners specially trained to correct the type of alignment problems that lead to the type of problems discussed above. You can find a practitioner in your area by clicking here to access that list of practitioners. 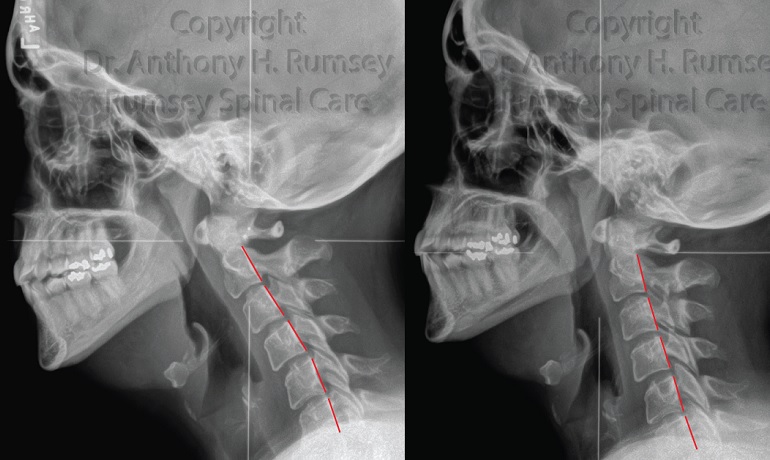