So it’s been awhile since I’ve posted anything here in my NUCCA practice blog. The truth is that I just haven’t felt like it over the last few months. It turns out that having a kid basically rewires your brain and you forget all the things that used to be high on your priority list–and if it doesn’t, you’re probably a bad parent (so at least I can take some comfort in that).

I have to give credit to the guys out there who consistently post new content in their blogs. I don’t know how they can keep up with it. I know a couple guys who regularly write their own stuff, and I’m amazed that they keep up with it.

I recently had a case though, that I thought was worth sharing because it’s a microcosm of how a lot of folks get initiated into the dark arts of upper cervical chiropractic. Plus, it’s also an interesting case from a practitioner’s standpoint.

Some patient interactions just stick with you for one reason or another, and a little over 2 years ago I had one of those. It was a guy, we’ll call him “A.B.”, and somehow he ended up in my office telling me about a life of neck problems, and how whenever it acted up he’d have a chiropractor work on his neck for awhile and it would be okay for another couple months.

The problem was that this time it wasn’t working, and now he had all kinds of pain and other stuff running down both of his arms and into his hands. This was a problem because he made his living working with his hands, and he wasn’t able to get any sleep lately either. A.B. was an older gentlemen with a pretty gruff, deadpan personality (you know, the type you get pretty used to when you grow up in the sticks in northern Wisconsin), and his solution to the problem was, and I quote, “I’m contemplating taking up drinking again in order to get some sleep.” 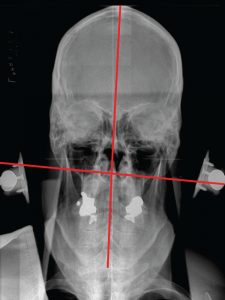 No, those are not my real analysis lines, they’re just to provide some easy to see perspective.

So we took a look, found Atlas Subluxation Complex, and made NUCCA X-rays.

Work proceeded, and upon completion I remember A.B. standing up and looking at me with his most practiced “I’m not amused” face. After a good long dose of that stare, he was kind enough to alert me to that fact that he had seen a lot of chiropractors, and “whatever that was, it was not chiropractic.” 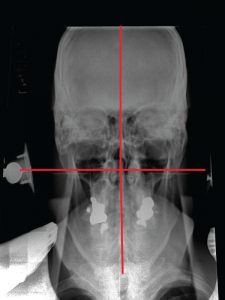 I have no idea how I responded, but evidently it was enough to get the necessary NUCCA post films, which, thank the orthogonal gods, confirmed a really nice correction.

A week later I saw A.B. again to check back on that correction. He was just as deadpan as ever, so after finding that everything was holding, I’m thinking to myself, “after last visit’s less-than-positive reception to his NUCCA correction, what’s he going to say after I tell him I’m not doing anything at all this visit?”

Me: “Well A.B., everything looks great. Your correction is holding, so we’re not going to touch it today.”

A.B. <dramatic pause accompanied by prolonged expressionless stare> “Good. Because whatever you did, it worked.”

If I’m honest with you, I have to say that I was pretty relieved to hear that. Mainly because problems like that don’t always get solved with just one correction. Sometimes it takes a little time. And I had a feeling that the needle on A.B.’s belief-o-meter wasn’t tacking very high, so if he didn’t get quick results, he’d just be off to either “live with it” or find someone to yank on his neck until they got lucky.

And that was the last I saw of A.B.

Until just recently. I picked up the office phone a couple weeks ago and even though it had been over two years, I somehow instantly recognized the voice on the other end. It was A.B. He wanted to know if I’d see him, and we set up a time.

Was the arm pain back? Had it been gone for the last 2 years? I was looking forward to seeing what had transpired with this long-lost Type I(c) correction.

Same old A.B., different problem. As it turns out, the arm pain never came back, but a relatively innocuous misstep had recently resulted in terrible low back pain, and burning pain in both legs from the knees down.

My spidey-sense was telling me that an updated X-ray was in order. It would be interesting to see if this thing was still the same Type I(c) giving a completely different set of symptoms, or if something had changed.

(As an aside, I put a little adhesive BB at the intertragus notch of the ear to help with finding the contact point for the C1 transverse process. Normally, I’d just put one on the side of atlas laterality if it’s already pre-established from a prior film, the left in this case, but for some reason my spidey-sense tingled again, so I put one on the right ear too.)

I was completely surprised to find that A.B.’s misalignment appeared to have changed from a left side Type I(c) to a right side Basic Type II (and I patted myself on the back for putting that BB on the right side as well as the left). In fact, I really questioned whether or not I had analyzed the film correctly. It was a well-taken film. I re-analyzed and came up with the same thing. It still made me uncomfortable, but the facts are the facts.

Work proceeded, and it appeared that I had earned a modicum of trust from A.B. based on the absence of any questioning looks or disparaging remarks. It took a couple post-films, but we ended up with a good correction–laterality below 0.75°, with just 1° of the previously 3.75° of angular rotation left.

I expected that the current symptomatic picture would take some time to resolve, and attempted to relay that to A.B.–sometimes I worry that a patient who sees immediate resolution from a problem will expect all future problems to immediately resolve as well. Unfortunately that’s not how things work all the time.

A week later I see A.B. to check on his correction: “Well A.B., everything looks great. Your correction is holding, so we’re not going to touch it today.”

If I said I enjoyed all my patients, I’d be lying–but I do enjoy almost all of my patients. That being said, there’s nothing more fun than the ones like A.B. who snap back into shape like one of those wristbands kids used to get from the dentist back in the ’90s.

From a technical standpoint, it’s an interesting case, given that you’ve got two completely different symptomatic pictures, both responding very favorably and separated by a significant period of time, with not only different misalignment types, but different sides of atlas laterality. Personally, I almost never see the side of laterality change, so that was particularly interesting.

More significant though is the transmogrification of A.B.’s perception of upper cervical chiropractic. After I announced that he was holding his correction this last visit, he relayed to me his attempt at explaining what we were doing to a few of the guys at work, suggesting that they should come in and get checked. “But they just looked at me like I was crazy“, he said.

And that’s how it generally works. It sounds crazy when you explain the NUCCA procedure to someone whose concept of healthcare is pretty much limited to hospitals and television ads, but when things get bad enough, and no one else seems to have any solutions, sometimes you end up in a NUCCA practitioner’s office.

And when you get a good NUCCA correction and have the normal biomechanics restored to this region whose integrity determines whether or not your brain, brainstem, and all the surrounding nerves, fluids and vessels are able to operate properly, then you start to get the Big Idea.

And then you might just try to explain it to someone else. And they may very well look at you like you’re a little nutso.

It will be interesting to see if A.B. shows up again in a couple years.