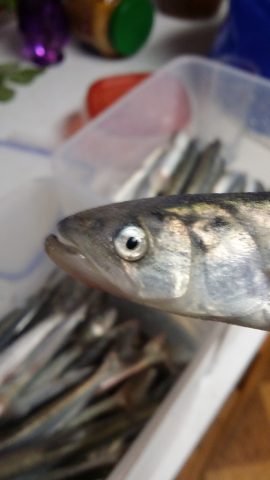 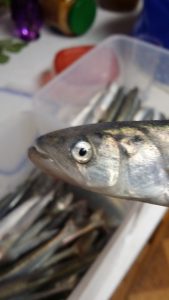 I remember my wife Kathy and I driving south out of Anchorage along the Turnagain Arm right after moving to Alaska in May of 2011, wondering why the speed limit just dropped to 45mph in the middle of nowhere. Of course I’m assuming that we’re slowing down for another dose of the ever-present Alaskan summer road construction. But instead we find ourselves motoring through a crowded highway corridor of bucket and net-wielding men, women and children.

I had no idea what was going on at the time, but I found out later that all those people were dipnetting for a little fish most people up here call “hooligan”.

Hooligan are great. Why? 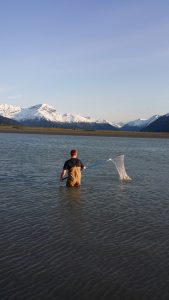 Way better than sitting on the couch on a Thursday night

Mid to late May provides some beautiful evenings in Alaska with warm weather and and sunshine that just won’t stop. That’s the perfect time to drive down to 20 Mile River with the family after work, set up a couple lawn chairs and put your net in the water. It’s fun watching little kids get excited as you scoop those little hooligan out of water, and standing waist deep in the water staring at the Chugach is a relaxing way to unwind after a long day. It’s best to time it so that you’re fishing at least a couple hours after high tide–when the tide is going out. Some people say different, but that’s when I’ve had the best luck.

On a decent day you should be able to fill a bucket with 100 or so fish in an hour or two. On a great day you might get two or three times that. And you can catch as many as you can handle because there’s no limit. I usually stop at around 100 because that’s about all I can fit in my smoker at one time. One of the things to love about hooligan is that when you get home, unlike salmon, you’ve got no fish cleaning to do.

Some people do take a scissors or small knife and scoop out the guts, but that seems like a waste of time to me–especially if you’re smoking them, which is what I do primarily. Even if you pan-fry them, you can just eat the whole fish and you won’t even notice the bones.

In fact, pan-frying them is probably the best way to eat these little hooligan because, although they’re delicious smoked, you do lose a lot of the oil content. As mentioned above, these little fish are good for you. They’re about 20% oil by weight! And most of those oils are mono-unsaturated fatty acids—particularly oleic acid, which is the main oil that makes up olive oil. Hooligan have very few polyunsaturated fatty acids, so they won’t be oxidized easily and contribute to inflammation. Polyunsaturated oils are found in great abundance in processed foods made with or cooked in vegetable oils, and should be avoided at all times. 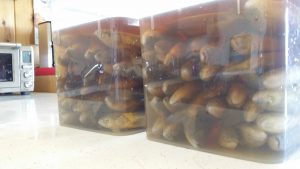 Hooligan in their natural environment: brine 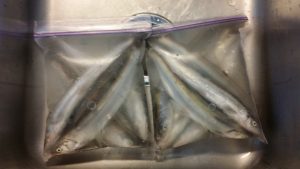 So all you need to do when you get home is give them a quick rinse under cold water, and drop them in a brine. If you have more than you can fit in your smoker, it’s a good idea to stuff them in a freezer bag filled with water and throw them in the freezer. Don’t waste your time gutting them first–if you’re squeamish about eating the entire fish, just gut them later when you thaw them out for use.

I do a simple brine with 1 cup of salt and 2 cups of brown sugar for each gallon of water. Dump the rinsed hooligan in the brine, and after 75-90 minutes pull them out and give them a quick rinse before setting them up on your smoker racks. You’ll be sorry if you don’t brush your racks with olive oil before putting the fish on them though. So don’t forget it.

Just like smoking salmon, you want to let them sit in the air for awhile to form a pellicle before you put them in the smoker. I think it’s a little different 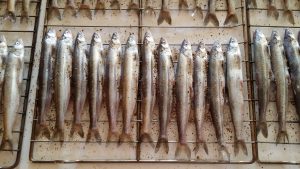 Because they’re really oily, it’s not a bad idea to have a catch for the oil on the bottom of the smoker

with the hooligan because instead of having exposed fish flesh, you have the skin and body intact. So maybe the pellicle isn’t as important. Regardless, I like to let them sit for at least a few hours, and most of the time I just let them sit out over night until I can get them in the smoker the next morning.

Once they’re ready for the smoker give ’em a quick once over with some fresh ground pepper, and then start them out at about 120°. There are a lot of ways you can smoke these little guys, but what I like is to end up with “hooligan jerky”. So I smoke them long and low. I’ll keep them in the smoker at 120° for anywhere from 8 to 12 hours, and might raise the temperature to 140° for the last hour depending on what they look and feel like at that time.

I usually use alder and apple wood and keep a lot of smoke on them. After 4-6 hours, I’ve found that it’s important to take the racks into the house quick, flip the fish over to the other side and re-pepper them. 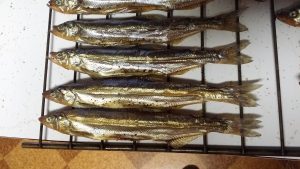 When you put them back, make sure to put the bottom rack on the top of the smoker and vice versa.

As long as you don’t let the temperature get too high, after 8-12 hours you should end up with beautiful bronze little hooligan that eat like a good jerky meat.

Vacuum pack what you don’t eat right away, stash them in the freezer, and you’ll have a tasty treat to take with you on weekend trips for the rest of the year.