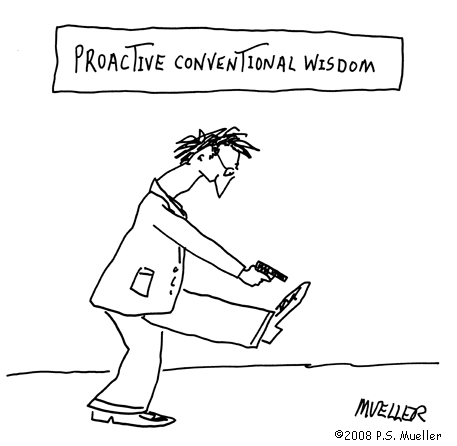 This morning while I was filing and organizing a box full of documents I had sitting in the corner, I ran across a folder full of letters given to me by some of my previous chiropractic patients.  Now, one of the reasons I love the work I do so much is because I get the opportunity, not only to see individuals have their health returned to them, but also to see the spark of understanding that ignites when they realize that following healthcare’s conventional wisdom had only been serving to perpetuate their problems.  So letters like these allow me to recall some of those moments, and in reading through a few of them I couldn’t help being impressed by the fact that so often conventional wisdom is not only wrong but sometimes downright dangerous.

Linda, for example, explained how she had suffered two fractured vertebrae in her lower back several years prior to seeing me; she had terrible headaches most of each week, along with tingling that would show up sporadically in her legs, and was just plain exhausted and fatigued both physically and mentally.  Like most of us would, she followed the course offered her by conventional healthcare, and in her own words, “After trying various courses of treatment, I was resigned to believing surgery was in my future, but was determined to put it off as long as possible.”

Putting surgery off as long as possible eventually led her to investigating NUCCA, but she didn’t begin care the first time we met.  As so often occurs, conventional wisdom, rather than providing a helpful path, had created a barrier to health:  “Trust me when I say I was skeptical at first.  Having heard negative things about chiropractors in general, I put off becoming a practice member until I was desperate for pain relief.”

If there’s one thing I’ve seen that tends to spur individuals into action and past the confines of conventional wisdom, it’s desperation.  The danger though, is that oftentimes that point of desperation comes too late, after there’s already been permanent damage done.  Gratefully, that wasn’t the case with Linda.  One of the remarks in her letter was particularly striking to me:  “Sometimes when I think about how much better I do feel, I scare myself when I think I almost did not try the Upper Cervical Chiropractic treatment, as I wonder how much worse my body would have been now – a year later or where it might have been 3, 4, 5 years down the road.”

I think that it’s easier for some of us to step outside of the box than it is for others, particularly when that step concerns our health and well-being.  Sometimes though, that step is the only one that will put us on the right track, and in Linda’s Case, I’m thankful that she took it.  You don’t have to step blindly though, nor should you.  In fact, like omega-3s, saturated animal fats, and brightly colored vegetables, a good-sized chunk of skepticism makes for healthy living, so long as it’s tempered with a genuine desire to find the truth.  If you’re searching for answers to your own health problems, why not contact me so we can find out if NUCCA can help you too.