There’s a lot to measure here.

(or, Answers to Questions I Commonly Get Regarding X-rays)

I know this because my job is to realign these spinal bones. And when that’s done properly, these problems go away.

The thing is, if you want to realign something, you first need to know how it’s misaligned. And since we’re dealing with misaligned bones, X-ray is the obvious solution.

Accurately taken X-rays are required if you’re at all serious about correcting spinal misalignment because:

I guess that pretty much answers the first question that I commonly get about X-rays, which is:

Why do I need to have X-rays taken at all?

Misaligned spinal bones = mechanical and neurological dysfunction = the pain and symptoms you want to get rid of.

If you’re being told that your spinal bones are the the wrong place, it kind of implies that there’s a right place for them, doesn’t it?

And if the goal is to get them in the right place, wouldn’t it follow that you need to know where they are to begin with in order to move them to the right spot?

At this point I like to pull out a quote from a really smart guy who most often goes by the name Lord Kelvin:

The X-ray is what allows us to measure the misalignment – its direction, complexity and severity–not to mention the detection of physical variations in an individual’s anatomy that may cause a practitioner to refrain from adjusting at all or modify an adjustment in order to provide for the safety of the patient.

But, you may say, ‘My chiropractor/osteopath/physical therapist manipulates my spine and doesn’t take X-rays.’

That may be so. In which case there are two possible explanations:

Some practitioners just aren’t interested in spinal alignment. Why? I have no idea. Personally I  think it betrays a significant lack of understanding about how the human body operates in a state of health, but apparently there’s no law against indiscriminately twisting, popping and cracking a person’s spine.

On the other hand, some practitioners are under the illusion that they can “feel” spinal misalignment; they use techniques like motion palpation to detect areas that need to be “adjusted”.  What is actually being felt by these practitioners are fixations–areas of the spine that aren’t moving properly, or are stuck. And while there may be some benefit to “releasing” these fixated segments of the spine, the process bears no relationship to the correction of misaligned vertebrae.

But what’s most important in both of these situations is the fact that uninformed manipulation of the spine, rather than leading to corrected spinal alignment, is more likely to result in increased misalignment–and potentially the creation of new problems. I’ve had many individuals end up in my office with new headaches and other worsened symptoms after being manipulated by DCs, MDs and ODs.

Now, I will say that these situations almost always involve manipulation of the head and neck. Probably because uninformed manipulation of the thoracic and lumbar spine is less dangerous because the bones are larger and involve a motion pathway that is better defined by the shape of the joints; and the supportive structures like the rib-cage and larger muscle groups provide greater protection against mal-adjusting.

Whatever the case, a reasonable and commonsense approach is to strive to know as much as you can about the misalignment before you adjust. And of even more importance is the confirmation afterwards that your adjustment has actually resulted in an improvement to the state of the patient’s health.

Okay. Now that we’ve beaten that to death, the most common question I run into is the following:

Are these X-rays safe? (or some variation of that)

This is an excellent question. Some practitioners get annoyed with questions like these and they will get very short with you if you question anything that they recommend. That’s an ego problem, and unfortunately most doctors tend to have overly inflated egos.

In reality, questions like this betray the fact that you realize that you are responsible for your own health and you can’t really trust anyone else to care about your health more than you do. Questions like “is it safe?” or “is it necessary?” usually clue me in to the fact that I’m dealing with a rational, thinking human being. And I think that’s a good thing.

So, are X-rays safe? This is a big question with a lot of material that could be gotten into. For our purposes in this article, we’re going to try to keep it relatively short, simple and useful.

Imagine you’re with your good pal Indiana Jones, being chased by an angry mob of Nazis who desperately want to harm you. You round a corner to find a motor-bike and sidecar that would make for an awesome chase scene. Ignoring the helmet lying on the ground next to the bike, you jump in the sidecar as ol’ Indiana kickstarts the bike and you both get away by the skin of your teeth.

Is riding in the sidecar of a motorcycle without a helmet safe? Perhaps not, but it’s a damn sight safer than taking your chances with angry Nazis.

Which is my over-the-top, way too dramatic way of illustrating the X-ray issue. While there are some that would argue whether or not the levels of ionizing radiation involved in X-ray are damaging at all, I tend towards the opinion that you want to receive as little ionizing radiation as possible–and that includes X-rays.

But sometimes X-rays are a necessary tool involved in correcting a problem that is far more dangerous to your health (the Nazis, if you’re following my analogy here). 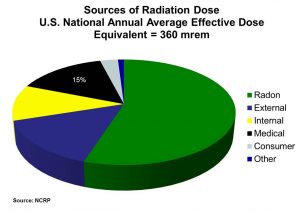 The good news is that in general X-rays involve very little radiation. For example, in the United States  you’re likely to receive about 360 millirems of “background radiation” per year. Background radiation comes from cosmic rays, land, rocks, food, water–it’s just part of existing on planet Earth. And if you live in a higher elevation like Colorado, you might get up to 540 mrem per year. And other activities may increase your dosage as well. For example, a jet flight will probably get you an additional 1/2 to 1 mrem per hour on the plane.

For comparison, we can use data from the ADPH X-ray Compliance Branch Office of Radiation Control which reports that the average A-P (front-to-back) cervical X-ray in a chiropractic office is equal to about 78 mrem.

So when you’re dealing with most X-rays, and particularly cervical X-rays of the head and neck, you’re really talking about radiation dosages that are, at most, negligible in terms of health risk.

But even in extremely low doses, I’m of the opinion that it’s better to play it on the safe side whenever possible.

Which is why I (and any other upper cervical chiropractor worth his salt) take additional measures in my office to ensure that our X-rays are safer than those you’ll encounter in just about any other chiropractic, dental or medical practice. The most significant measures are:

Closing down the port involves the installation of a special “window” of lead shielding into the X-ray port to block any “stray” X-rays that could reach the patient. In addition to protecting you from unnecessary X-ray exposure, this also creates a clearer X-ray.

Lead-foil compensating filters are special shields that block additional unnecessary X-rays from reaching the patient. By using these special filters we’re able to reduce the amount of X-ray by an average of 65-78%, depending on the type of X-ray being taken.

AND the X-ray exposure to the majority of the skull and eyes is reduced by 97%!

And if you’re having orthogonal upper cervical X-rays taken at my office, you’re reducing your overall exposure even further.

I’m tempted to go on at this point and discuss the importance of having properly aligned X-ray equipment. Why? Because the vast majority of X-ray units are not aligned, and without perfect alignment of the X-ray machine you can’t  get accurate X-rays or accurate measurements of spinal misalignment.

If you come away with anything from this, I hope it’s the realization that: